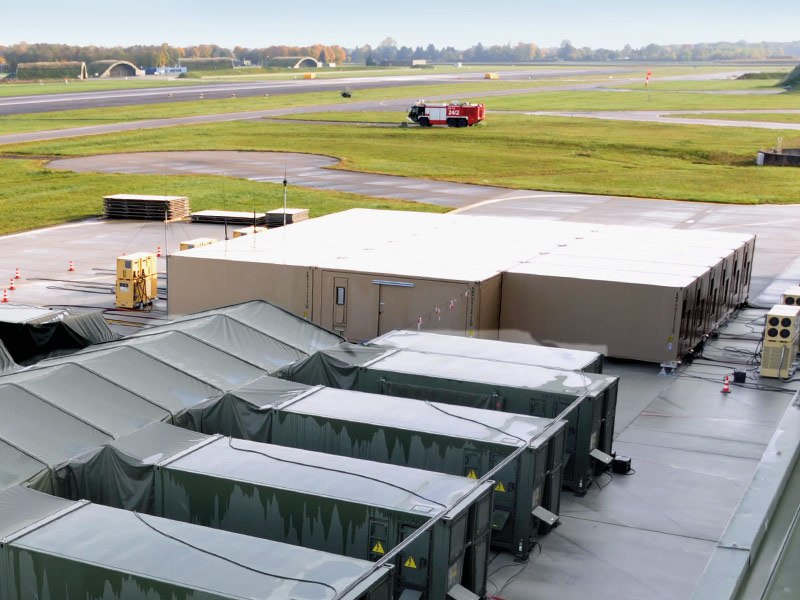 In a project carried out in August 2020 together with the German Air Force, the German Navy tested the GSCS (Ground Support Container System Eurofighter) mobile command post. Hereby, the system's suitability for Navy tasks and missions was tested in different deployment scenarios. The aim of this project is the future use of this supporting element as a mobile Navy command post.

Use as a command post for maritime patrol aircraft, for harbour surveillance, or as a redundant system for bridging the outage of fixed-site command infrastructures are just a few examples of how such a system can be deployed by the Navy.

As sub-contractor of a consortium consisting of ESG and steep, DREHTAINER develops and manufactures the container shell for the GSCS. Borrowed from the German Air Force, the partial system consists of 13 containers, which can be assembled to create a HF radiation-proof and fully air-conditioned building.

The Navy was highly impressed by the system's outstanding mobility and flexibility. In order to map command and reconnaissance around the world, thereby complying with present and future deployment scenarios, the Navy intends to purchase several systems. For this purpose and to ensure optimum connectivity with other armed services and nations, standardised command post solutions using containers such as the GSCS will be resorted to.

A detailed account of the command post tests conducted by the German Navy is available under: https://www.bundeswehr.de/de/organisation/marine/aktuelles/marine-erprobt-mobilen-gefechtsstand-2038972